Shorter, faster connections that are more direct – the Stuttgart-Ulm project will revolutionise rail transport in Baden-Württemberg. Comprising over 100 km of new, high-speed tracks, three new stations and a cutting-edge transport concept, the project is nothing short of a new beginning for rail travel.

One of Germany's busiest rail nodes

The combination of Stuttgart 21 and the new-build line between Wendlingen and Ulm enables the Stuttgart rail node to make full use of the rail network's potential in the 21st century. Thanks to the new tracks, trains will be able to travel at speeds of 160 km/h for the most part and even reach 250 km/h on the line to Ulm. They will all take the most direct route possible and so do away with the often circuitous detours rail passengers are currently forced to make.

Stuttgart's new "rail ring" will offer unprecedented flexibility when it comes to scheduling services. Instead of forming a bottleneck that causes trains to block each other's progress, the new lines will pass over and underneath other tracks, freeing up the entire node. Trains will not only be able to travel at higher speeds, but timetables will be more flexible and services more punctual.

The S-Bahn rapid transit system will also benefit from the node's restructuring: in future, S-Bahn trains will no longer have to share tracks and platforms with scores of regional trains each and every day. In addition, a new S-Bahn station will be constructed at Mittnachstraße to serve the Rosenstein district in the centre of Stuttgart.

The nerve centre of the Stuttgart 21 rail project is taking shape right in the heart of the city: Stuttgart's new main station. This ultra-efficient transport hub links long-distance, regional and rapid transit rail services with the city's light rail and bus networks in the fastest possible way. The station's status as the heart of the city's transport system will be further underscored by taxi ranks and car parks for long-term and short stays.

Efficiency, speed and convenience: these will be the hallmarks of the redesigned station and new rail routes. Today, trains creep along at 30 km/h as they pick their way across scores of narrow switches to reach the station, but in the future, they will be able to travel at a minimum speed 80 km/h as they approach the platforms. Trains will no longer block each other as they wait to enter or leave the station, and the number of adjoining tracks leading away from the city will be increased from five to eight. The latest in control and command systems will further increase the speed of arriving and departing trains.

As so spectacularly revealed by the stress test, the eight tracks at Stuttgart's new main station will be able to handle many more trains than the sixteen tracks at the current terminus-style station.

The new station will no longer force trains to reverse direction, a technically complex process that requires a lot of coordination, just so they can continue their journeys. Instead, they will simply be able to continue straight on. This change will enhance the flexibility of train services: if necessary, it will be possible to combine lines that currently end in Stuttgart. Passengers can stay seated instead of having to change trains to complete a trip, and trains can depart quickly after people have finished boarding and alighting.

Faster access and shorter distances will also be a key feature of the new station. Its concourse is only half the length of the current building's, but no less than seven escalators, five staircases and three lifts give access to each platform, a threefold improvement on the situation today. These lifts, staircases and escalators connect the platforms to three walkways overhead and also lead down one level to the S-Bahn. By rationalising pedestrian routes within the building, passengers never have to walk more than 120 m to reach a train, a big change from the 300 m sometimes necessary at the existing station.

Similarly, the new concourse will be appreciably closer to the redesigned station's many entrances, which will include new doors providing access from the north and east. The new main station will also have an advantage in terms of elevation. It will be situated a good dozen metres below today's tracks, bringing it far closer to the level of its surroundings. This means travellers will enter on the ground floor and remain on the same level until they reach the new pedestrian walkways leading to the train platforms one floor down. In addition, the transformation will entail the construction of a new urban light rail line and the alteration of the nearby stop to improve access to and from the main station.

Moving from the periphery to the centre: the Filder region's new rail hub

A second rail hub serving Stuttgart's airport and trade fair grounds will be constructed in the Filder region south of the city. This new station for long-distance and regional services will transform the area, currently somewhat peripheral, into a central transport node. The new connection will make a straight line for Stuttgart Main Station and so be just over half the length of the current route. It will also be open to high-speed trains, cutting the time it takes to reach the main station from 27 to a mere 8 minutes. S-Bahn rapid transit services will be retained and augmented by an additional five trains per hour in both directions, bringing the number of services to nine.

The new hub will connect different modes of transport in a unique manner: long-distance, regional and S-Bahn rail services will be located immediately next to Stuttgart's airport and trade fair grounds. Urban light rail services will also extend to the airport. Combined with an extensive bus network and parking facilities for cars, the end result is a perfect combination of different forms of mobility. 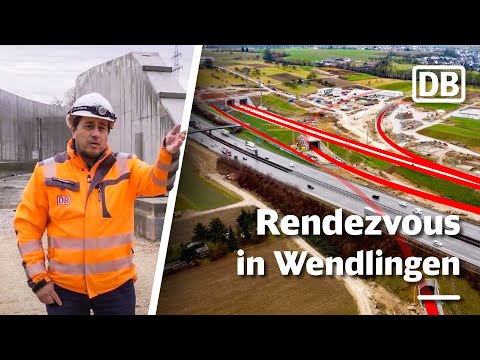